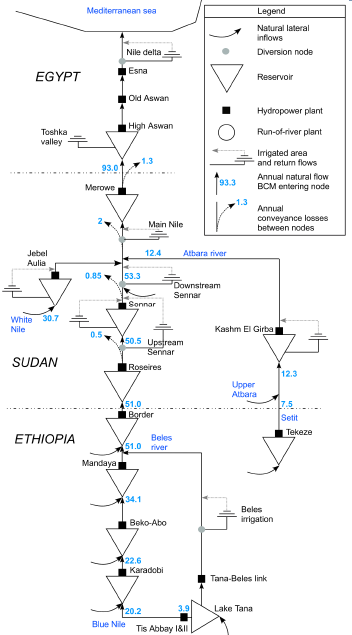 The Grand Renaissance Ethiopian Dam (GERD) is under construction since 2011. According to information released by the press impounding of the reservoir is planned to start in 2015, to be filled in 2017. The storage capacity of the dam is 74 km3/year, about 1.5 times the mean annual flow of the Blue Nile at the site (48 km3). This will have significant downstream impacts, both positive, and negative. It is expected that the GERD will completely change the flow regime of the Blue Nile River. River floods will reduce, while base flow will increase. This will substantially decrease flood plain agriculture along the Ble Nile, and further north along the Main Nile. On the other hand, enhanced base flow will boost hydropower generation from downstream dams, and improve water supplies for irrigauted agriculture. The GERD may obstruct some of the sediment load of the Blue Nile, both the bed and suspended loads.

Being located at a very short distance from the Ethiopia-Sudan border, the GERD can pose a real threat to all livelihoods downstream, not only in the case of dam failure, but also the mode of operation if not in coordination with downstream reservoirs.

This study has discussed the possible impacts, which can be grouped into four main fields:

The approach to assess the d/s impacts of the GERD:

The basic approach to assess the d/s impacts of the GERD will be through modelling to reach a sound engineering judgement. These can be grouped into three main modelling systems

The flood hydrograph after GERD will be chopped off, and base flow will increase significantly. Fig. 4 below gives an example of flood level reduction in Khartoum by 1.5 to 2.0m because of Mandaya with storage capacity of 16 km3 (ENTRO, 2007).

However, many parts of the basin were already practicing flood plain agriculture (Guroof farming). The flood plain area may shrinks because of a reduced flood level along the BN, and Main Nile. How much is the river flow, and levels during different seasons can be computed by a hydrodynamic model. For the given flood levels, the flood plain areas can be estimated from topographic maps and satellite imageries. As such reduction to agricultural land can be estimated. It is to be mentioned that, some of the floodplain area can be easily transferred to perennial irrigation system.

This part of the analysis would require accurate data on flood plain to be derived from topographic maps, as well as from satellite imageries.

The impact on pumping because of a more regulated flow, e.g., smaller pumping head can be estimated in a gross manner.

The hydrological analysis will include stochastical analysis to assess the downstream risks through a probabilistic approach.

To assess the impact of the GERD on the Sudan water resources it is customary to use a “river basin simulation model”. The model will represent the complete river system of the Eastern Nile, and related inflows from other streams. The model is forced by inflow boundary condition just upstream of the GERD. The flow time series measured at el Dime station can be used in this case. To obtain the full picture all the way down, the model should include all dams in Sudan, in White Nile, Atbara River, and Main Nile. We should also include AHD to see possible effects on this large dam.

All major existing and planned irrigation abstractions (e.g., Gezira, Rahad, Kenana, etc..) will be included in the model, as well as abstraction by smaller pumping schemes. The later is hard to assess accurately, and can be estimated by water balance between the different river reaches.

First a base line scenario will be calibrated and validated, then new scenarios will be included step wise, e.g., (i) GERD, (ii) GERD + planned reservoir upstream, (iii) GERD with different sizes, and so on.

The model will then assess the impact of the (possible) operation scenarios of the GERD on the downstream system, specifically on: (i) irrigation water supply, (ii) hydropower generation.

In one of the scenarios, the model will also include proposed dams, e.g., Karadobi, Upper Mandaya, and Mabil, as well as the proposed dams in Sudan (Dagash, Sabaloga, Kajbar, etc.).