As per a request from the Permanent Joint Technical Commission for Nile Water (PJTC), The Hydraulics Research Center (HRC) conducted a study to investigate a suitable location of a discharge measuring station within the reach upstream of the High Aswan Dam (HAD) reservoir and downstream the proposed Dal dam. The new station is planned to provide net outflow discharges data of the Nile River that needed for operating HAD. Currently, the outflow measurements to Egypt is taken from Dongola station (established in 1962). However, the distance from Dongola up to the tail end of the HAD reservoir reaches more than 300 km. In addition, such station may not be functional any longer in the future after constructing the new proposed dams of Dal and/or Kajbar in Sudan. Therefore, it is important to find another location, instead of Dongola, as a permanent measuring site.
The study includes investigation of the hydrology and morphology of the Nile River in the neighborhood of the proposed gauging site, as well as the topographic and bathymetric surveys.
A one-dimensional model has been built in SOBEK to study the influence of the backwater curve caused by HAD. The model has been calibrated and validated with historical records from nearby stations. The model results showed that the recommended reach as given by the terms of reference of the PJTC (20 to 40 km downstream Dal), is within the backwater curve of HAD, and may not be suitable for a discharge measuring station. This reach is also characterized by scanty villages, and difficult accessibility to the river due to the hill ranges on both sides of the river.
The evaluation of the river morphology of the study area (20 to 40 km downstream Dal) derived from satellite imageries for the last three decades showed that the reach is very stable, and experienced no morphological changes (no meandering).
The hydrographic survey comprises the land and bathymetric surveys to define river cross-section within the study area were conducted. The topography of the river channel bathymetry combined with DEM was used to generate contour maps of the river topography in the vicinity of the proposed sites.
The study concluded that within the reach of Dal – HAD there is no suitable location for discharge measurement because of the backwater curve effect. The backwater results in lowering the water surface slope, therefore, a smaller discharge passes through the gauging station for the same stage. In addition, the presence of backwater does not allow the use of a simple unique rating curve. Accordingly, it was not recommended to establish a discharge measurement station within the reach downstream Dal. 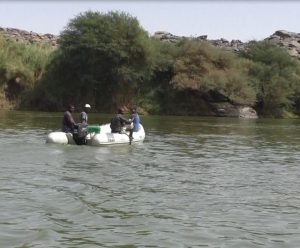 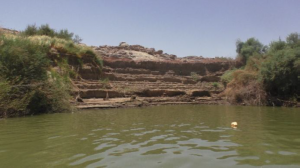